Posted on June 2 by Karisse Khoo

Anomaly detection enables abnormal metric trends in your system to be detected by analysing historical data. It is also an effective tool for detecting frauds and mitigating risks.

A change in a metric could be benign or harmful. As a result, it is crucial to have a robust anomaly detection system in place that can differentiate between unusual trends and minor changes around the clock and notify relevant parties to investigate the cause of anomalies.

There are many techniques to determine what an anomaly is depending on the monitoring tool that you’re using. In Ascenda, we leverage on Grafana’s interactive visuals coupled with Prometheus’s powerful querying language to build a time series anomaly detection within our system using z-score. 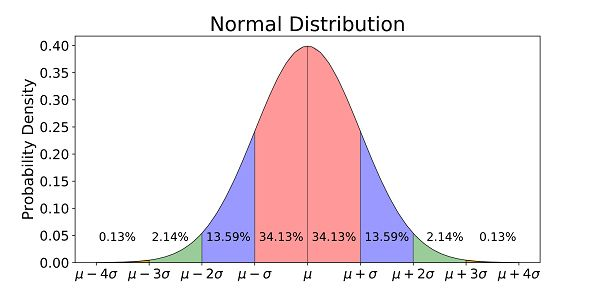 According to the 3-sigma rule that is commonly associated with normal distribution, 99.7% of our data should be within 3 SD. Any other values greater than 3 SD would be considered an anomaly. However, this can be tweaked according to your desired sensitivity.

Anomaly detection is the way to go, true or false?

What should you know before building your own anomaly detection with z-score?

Before we dig into its use cases in Ascenda, there’s one caveat to note to determine if anomaly detection using z-score is suitable for your use case: anomaly detection with z-score only works for normal distribution.

A z-score that is excessively large e.g. a range of -15 to +15, signifies that your data has a long tailed distribution where the tail of the curve stretches further in one direction. This means that events occurring further away from the head are rare. To illustrate this further using request response time as an example, we would expect most requests to have a fast response time (represented by the head of the curve) and slow response time should be a rare case (represented by the tail of the curve). Thus, suggesting that threshold alerts would be a better option compared to anomaly detection as we can determine the threshold for a slow response time.

Next, we’ll take a look at how this can be done.

A peek into z-score with Grafana x Prometheus

Here, we’ve tested with 1 weeks’ worth of data to determine if our data is normally distributed. Since it’s between +4 to -4, our dataset is suitable for anomaly detection using z-score.

Let’s check for the number of failed password resets over the past 5 minutes in comparison to the last 12 hours and set an alert when our z-score exceeds 3 in accordance to the 3-sigma rule. From 7am onwards, notice that our z-score has exceeded 3.

However, if we look at the datapoint from 7pm the previous day to 7am the next day in the image below, the spike from 6am onwards would cause a false positive because the data spanned across the last 12h wasn’t sufficient to detect abnormal trend accurately since activity is minimal during the night.

To reduce such cases of false positives, we modify our parameters to compare it with 1 week worth of data. Notice that the graph becomes smoother and the false positive is avoided.

However, this is where the Goldilocks problem might come in:

Anomaly detection enables our alerts to be smarter, and z-score is just one of the many methods that we can use for implementing an anomaly detection alert. However, we need to ensure that our dataset is normally distributed. Because different metrics produces different types of datapoints, there’s no one-size-fits-all solution. This might be a complex concept to grasp at first but through experimentation, you’ll eventually get the hang of it!

If you're interested to find out more about what we do, check us out at https://www.ascendaloyalty.com/